The rich and famous attract endless attention during their lives, yet in many cases they can become even more revered after they pass away. This means that many public figures receive particularly impressive memorials which fans and well-wishers can visit for decades to come.

Here are just 7 celebrity graves that you can visit to this day. Each one is remarkable not just because of the person whose passing they represent, but also because of the intricacy of the workmanship and the quality of the materials used to create the gravestones. 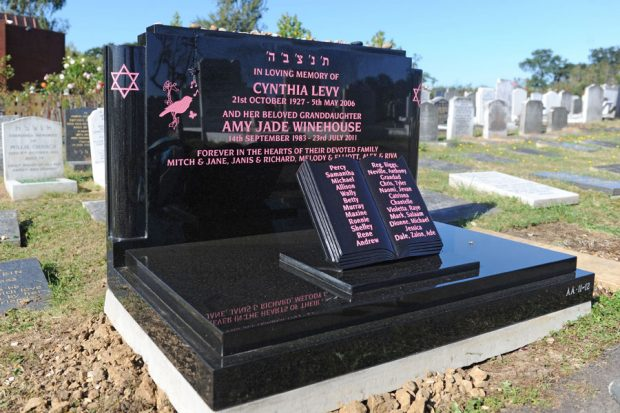 After her life was tragically cut short at the age of just 27, renowned British vocalist Amy Winehouse was mourned by millions of fans. The site of her grave in Edgware is marked by a sizeable black marble headstone, the colour of which is offset by the use of inscriptions inlaid in pink.

As well as paying tribute to the singing sensation herself, this also acts as a memorial to her grandmother Cynthia, who shared Amy’s passion for music and was involved in London’s jazz scene in her younger days.

At the front of the main stone is a second, smaller marble tablet which has been made to look like a book. It shares the same pink inscriptions and includes the names of many of the most important people in her life. This includes family members as well as celebrity collaborators, such as producer Mark Ronson, with whom Winehouse gained international success in 2007 thanks to their cover of Valerie by The Zutons. 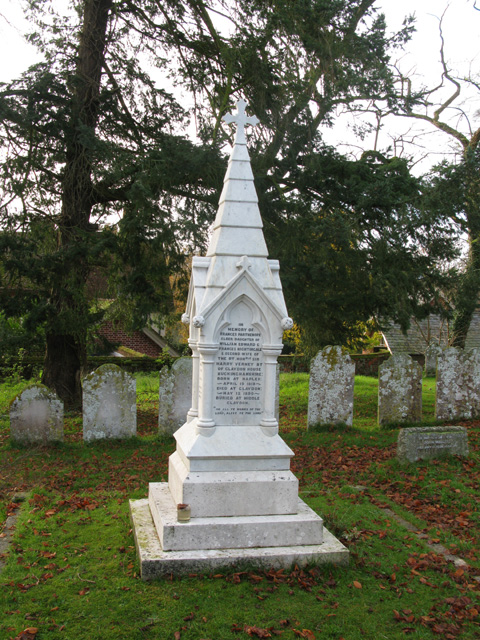 Widely regarded as one of the most important figures in the history of healthcare, Florence Nightingale not only helped thousands of people in her time as a nurse but also enjoyed a long life herself, dying in 1910 at the ripe old age of 90.

Like many celebrity graves attributed to the most important social, political and scientific figures, Nightingale was initially considered for interment at Westminster Abbey. However, this was declined by her family and her grave now stands close to where she grew up in rural Hampshire.

The gravestone itself is an impressive three metres in height and has actually been damaged in high winds in recent years and has since been restored to its former glory. It is a monument to the whole Nightingale family, finished in white marble, designed to resemble a church spire and inscribed with tributes to her father, mother and sister.

Perhaps the most interesting aspect of the grave is that while the inscriptions for the other 3 members of her immediate family are detailed, Florence’s is incredibly simple, consisting of her initials and the date of her birth and death. 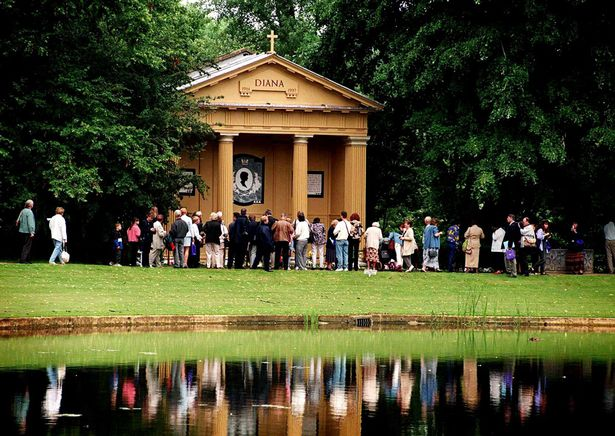 Situated at the centre of a lake in the grounds of Althorp House where she grew up, the gravesite of Princess Diana is one of the grandest of the modern era, entirely befitting of her status and significance.

While access to the grave is strictly prohibited, the main point at which members of the public can pay their respects is located nearby.

The large memorial temple adopts a Grecian style, with columns, a silhouette of the princess’ famous profile, a bench beneath which wreaths of flowers are regularly laid and inscriptions detailing her life and achievements.

Choosing to place the grave itself on the lake not only gives it an idyllic setting, but also adds a layer of security and privacy that her family believe is necessary to prevent any untoward attempts to interfere with the site. This is an issue which impacts some other celebrity graves, as we shall discover. 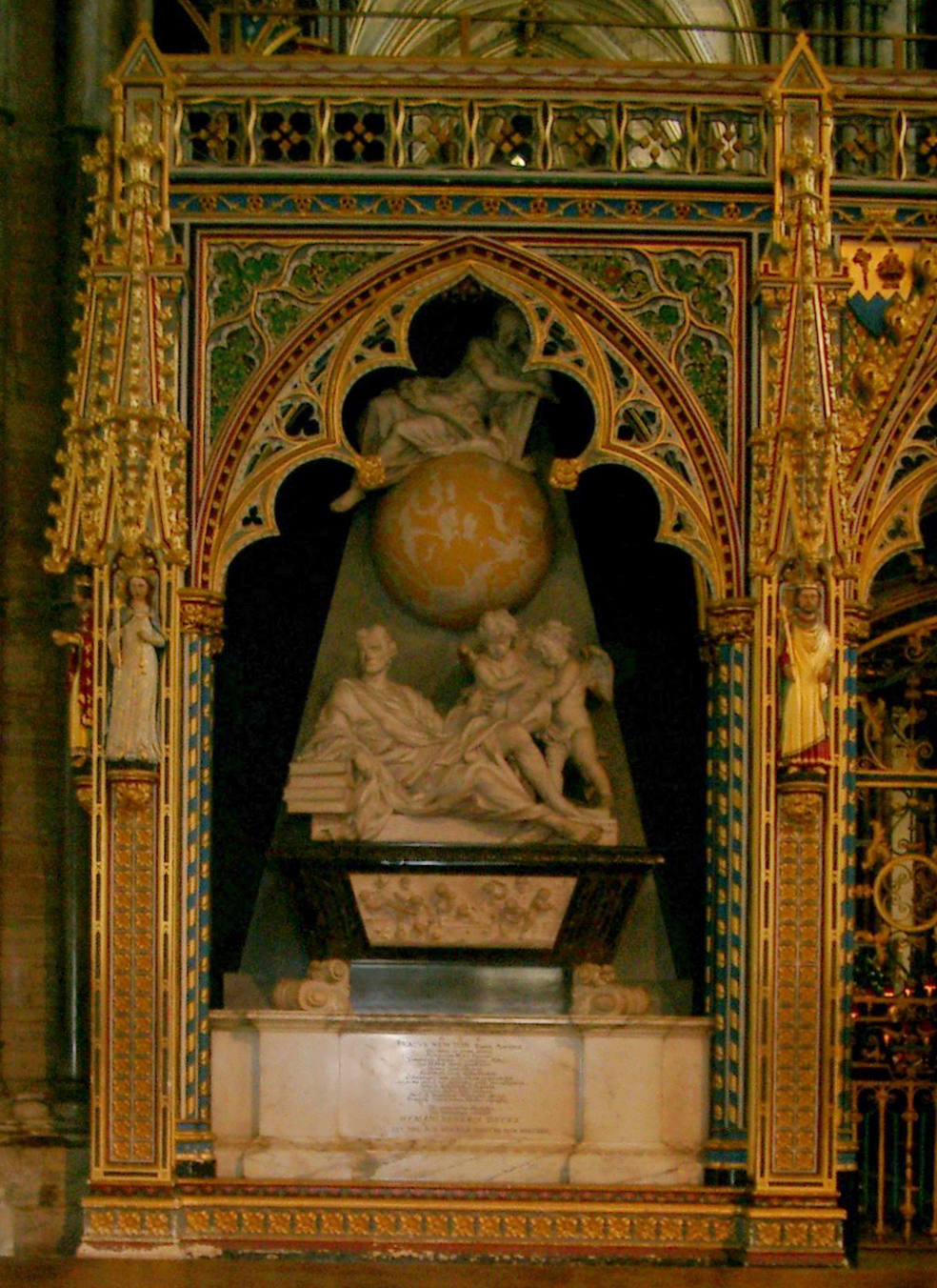 Westminster Abbey is the final resting place of many prominent figures, with the renowned mathematician and scientist Isaac Newton receiving an especially significant memorial within the building after his death in 1727.

Nearby to his grave is a monument to his great works of intellect, fashioned from marble in white and grey hues. It includes an inscription in Latin, praising his life’s works and mental acuity, along with a depiction of people studying the world using instruments that were designed according to Newton’s mathematical laws.

A little over 100 years after his death, this monument was altered through the addition of an arch that now stands over it, adding an extra layer of decoration while also providing practical benefits at a time when the nearby choir screen was being adjusted.

While visiting Westminster Abbey it is possible to see the graves of a huge range of famous individuals. This includes the naturalist Charles Darwin, the author Charles Dickens, the actor Laurence Olivier, the scientist Ernest Rutherford, the poet Geoffrey Chaucer and a number of monarch from throughout the ages. 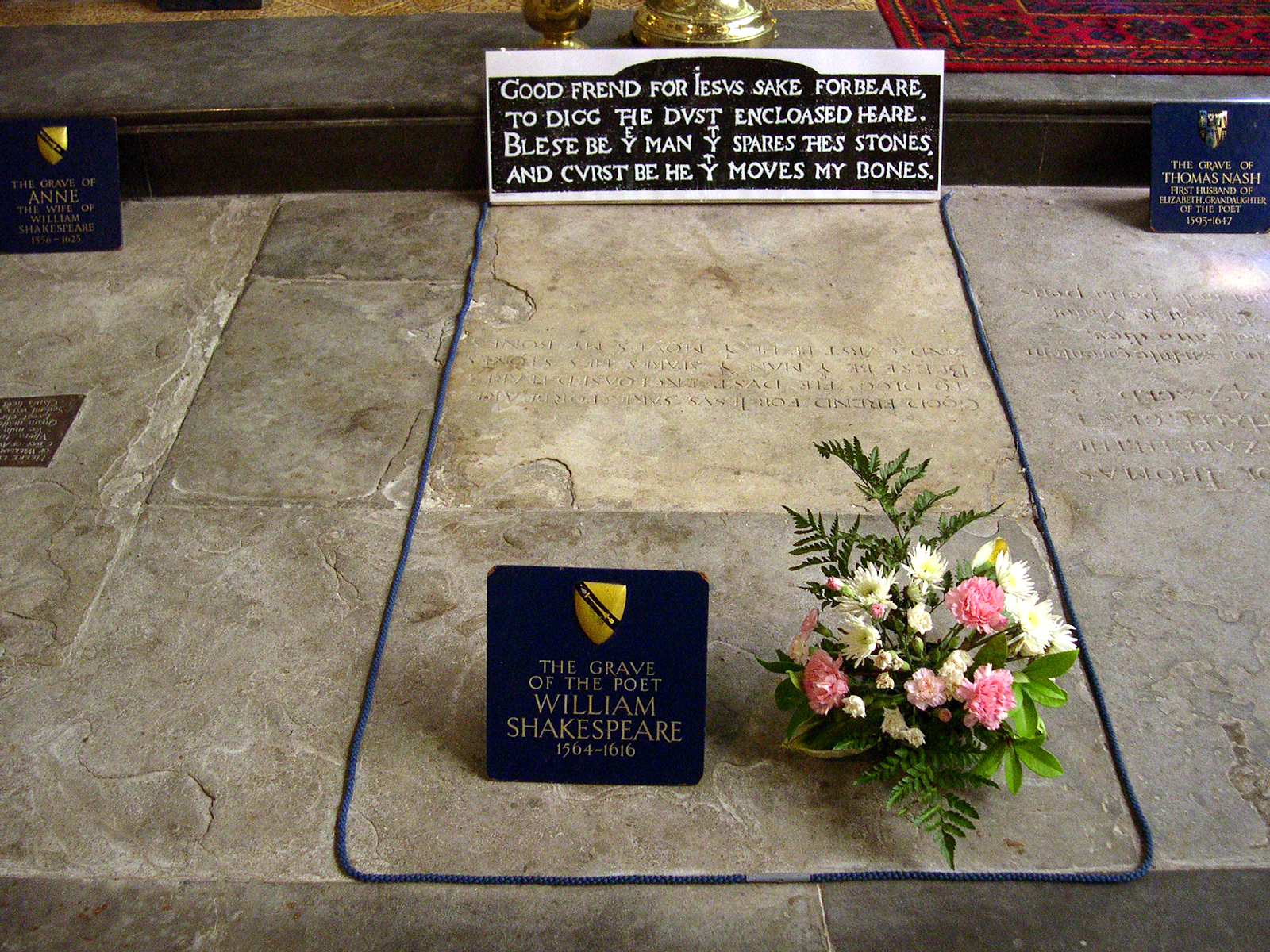 Set at head of a historic church and visited by thousands each year, the grave of great poet and playwright William Shakespeare is not just a point of pilgrimage for people from around the world, but also another aspect of the Bard’s life and legacy that is regularly debated.

Sitting alongside the final resting places of his other family members, Shakespeare’s grave is denoted by a thick stone slab, upon which is writ a curse that warns against the moving of his bones. This was likely not heeded in the 400 years since his death, as scans have shown that his skull is missing and is thought to have been taken in the 19th century.

The church also contains a bust of Shakespeare and a variety of other monuments to him, finished in stone, marble, filigree and colourful paints. While entry to the church itself is free, there is typically a collection made prior to reaching the grave site, which helps to cover the not insignificant maintenance costs that a building of this age incurs. 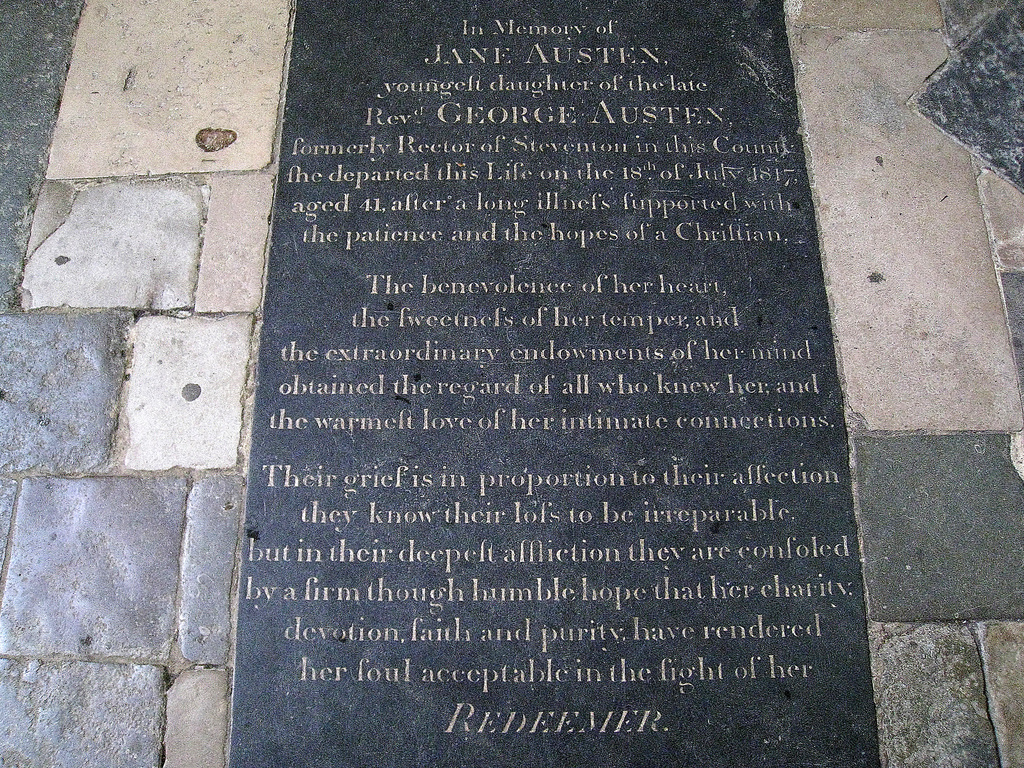 Jane Austen died at the age of 41, yet her influence in her life had already earned her a formidable reputation as a novelist and her burial at Winchester Cathedral is a symbol of her enduring impact on literature.

The grave itself is a simple affair; a slab of stone which does not mark out her successes as a writer but does speak warmly of her personality, attributes and values.

In the centuries since her death, Austen’s grave has become a hugely popular place for admirers to visit and additions to Winchester Cathedral do a little more to celebrate her life and talents for storytelling. This includes a burnished metal plate, finely decorated with floral and angelic elements, that speaks briefly of her significance. 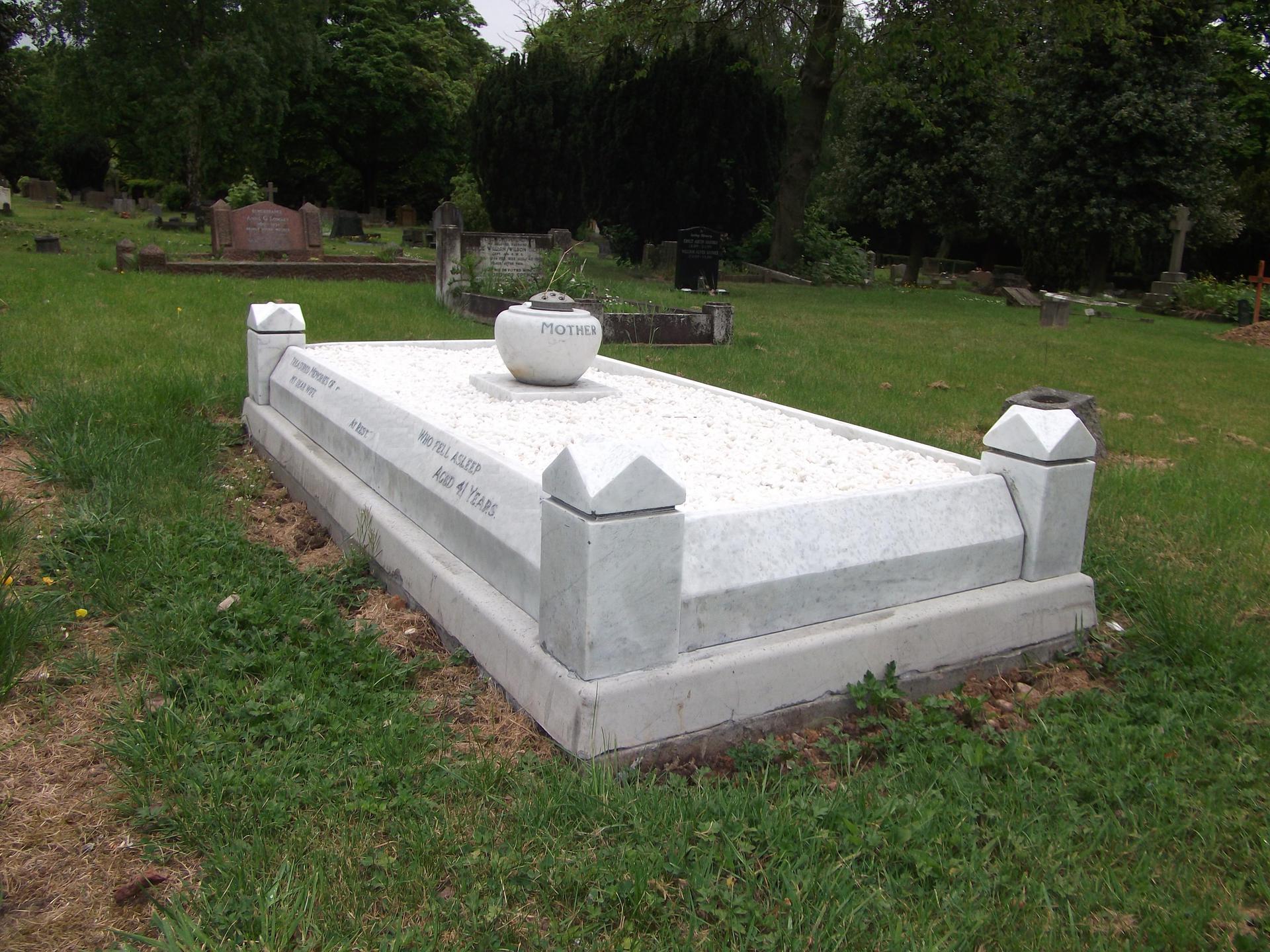 While Marx may have been born in Germany, he spent the final decades of his life living in the British capital and his gravestone is still located in one of its many cemeteries.

Like a lot of celebrity graves, the tomb which is dedicated to Marx is also the place where other members of his family are remembered. Indeed the current position of this memorial was only determined in the 1950s, at the same time as the tomb was designed and made.

The most noteworthy feature is of course the bust of Marx himself, which is cast in bronze and sits on a pedestal that is made up of many blocks of marble. Inscriptions found on the tomb include a number of excerpts taken from his most famous writings.

A controversial figure during his lifetime and to this day, Marx’s gravestone has been subjected to numerous attempts at vandalism in the past half century, most recently in February of 2019. Restoration of the marble can be difficult, although this has not stopped the grave from being refurbished in the aftermath of malicious attacks.

Do you have any questions or reservations? Give us a call today and we can put your mind at ease.